What is BME Growth?

BME Growth is a market for small companies looking to expand, with a special set of regulations, designed specifically for them with costs and processes tailored to their particular characteristics.

BME Growth is the market for BME's SMEs. It is a platform that allows growing small and medium-sized companies to access the capital markets.

Spain is predominantly a country of small and medium-sized companies, which play a critical role in our economy. In fact, more than 99% of Spanish companies are SMEs and these in turn employ 80% of our country's workforce, representing 65% of Spain's GDP. However, in a global world it is necessary for these SMEs to grow in size in order to compete internationally. BME Growth provides companies with visibility and credibility making it easier for medium-sized companies to access the capital they need to finance, develop and expand their business models and in some cases, when they have reached a certain size, move to the Stock Market. Not only does it offer them financing, it also offers them liquidity, visibility, professionalism and valuation. A whole range of advantages to become more competitive.

BME Growth is a market aimed at companies in any sector of activity, although currently there is a greater presence of companies in the technology, biotech and health, engineering, telecommunications and renewables sectors. The representation of the real estate sector (REITs) is also very important. Mainly local in origin, it is open to all companies regardless of the country of origin.

In its legal configuration, BME Growth is the segment for small and medium-sized companies of BME MTF Equity, a Multilateral Trading Facility (MTF) managed by BME and supervised by the CNMV.

It has a specifically designed regulation as well as costs and processes adapted to the characteristics of these types of companies, thereby maintaining high levels of transparency.  The Market has a set of Registered Advisers to help companies throughout the process, both in the phase of becoming listed on the Market and afterwards, in the day-to-day, to comply with the regulations required by the Market.

It also has an expanding group of qualified investors who support, trust and follow the organic and inorganic growth plans presented by the companies. Due to the profile of these types of companies, the investor must be aware that they often have to assume higher levels of risk for their investment.

A high number of companies, more than 130, have developed their growth in this Market over the last ten years and some of them have already made the move to the stock market. It has provided them with continuous learning given that the trading, settlement, clearing and trade repository are identical. 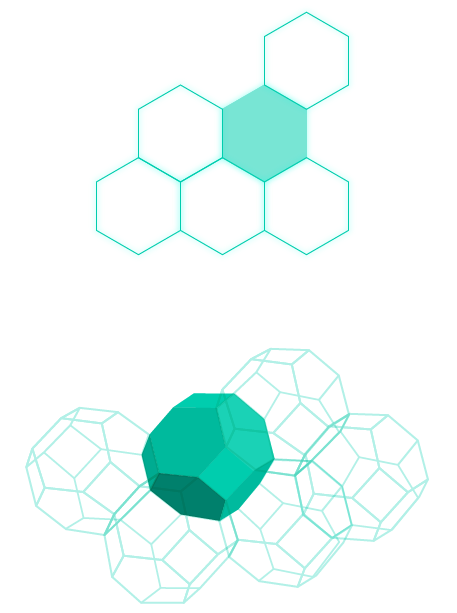 In 300 AC, Pappus of Alexandria reasoned that the hexagonal grid was the best way to divide a surface into regions of equal area. In fact, years later he proved this with his honeycomb theorem.

Later on, in the 19th Century, Lord Kelvin attempted the same but using a three-dimensional space instead of an area. He suggested that the ideal shape was a truncated octahedron but was unable to prove this mathematically…

More recently, scientists Denis Weaire and Robert Phelan from Trinity College Dublin discovered a more complex three-dimensional structure which offered a solution to the problem posed by Kelvin. This figure was named the Weaire-Phelan Structure.

This structure offers perfect expansion given the space available.

This website and market were designed based on that theory.

In fact, BME Growth offers small companies a platform on which to expand, with regulations and conditions in line with their characteristics.  BME Growth's commitment to these companies is to help them grow efficiently and to offer them the advantages of the securities market.

What is BME Growth